This article was originally published on my WordPress blog – August 2017. 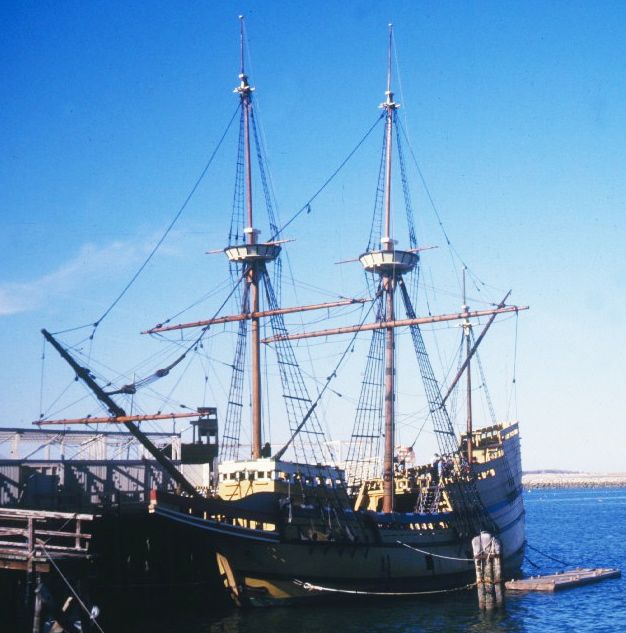 Although this 1956 reconstruction was intended to represent the Pilgrim Fathers’ 120-ton ship Mayflower of 1620, its design was largely based  on late 16th century English sources.  As such it gives a good idea of the appearance of the privately-owned ships in the English fleet that fought the Armada in 1588, eight of which became fireships.

The English fireship attack on the Spanish Armada on the night of 7th/8th August 1588 was the most effective assault made by an English fleet in the 16th century. The event is well known, but I want to look at it again because of its historical importance and because it is a story that has some uncomfortable resonances with our own times (1).

King Philip II sent the Armada in order to topple the Protestant Queen Elizabeth I and restore England to the Catholic faith.   War had broken out between the two nations in 1585 and would last until 1604. At no point in the conflict was England capable of destroying Spain, which had the world’s greatest maritime empire, but the Spanish perceived the English as a real threat. Amongst other things, they gave support to the Dutch Protestant rebels fighting Philip’s Army of Flanders, and English ships frequently  attacked Spanish vessels and possessions.

The strategy of the Armada campaign was simple. The Spanish fleet would sail up the Channel, avoid major battles with English naval forces, and link up with the Army of Flanders in the Low Countries, which was commanded by the Duke of Parma. Once this had happened, the Armada would convoy the Army across to England in a fleet of small vessels, landing in Kent.   The Armada was to contribute its own soldiers (more than 20,000 men), siege guns and military supplies to Parma’s force, and the joint army would then march on London. If the Armada had landed, the Spanish army – the most professional force in Europe – might well have carved its way through the English militia troops and reached the capital, with enormous consequences for the future.

However, Parma and even the Armada commander, the Duke of Medina Sidonia, had serious misgivings about the plan. Crucially, it assumed that faultless military and naval co-ordination was possible over long distances when messages moved at the speed of a ship or a messenger’s horse.

The Armada left Lisbon on 30 May, and after a long and stormy journey, finally sighted the English coast on 29th July.  Over the next week it progressed up the Channel, pursued and harried by the English fleet, but suffering no real harm.  The roadstead at Calais offered the only fleet anchorage within reach of Flanders (even though it was not a very safe haven), and the Spanish anchored there on 6th August. Soon after, Medina Sidonia discovered that Parma’s troops would not be ready for six days: Parma had only heard of the Armada’s impending arrival on the day that it turned up at Calais, and the Dutch were blockading his embarkation ports.

The English arrived at Calais on the 6th, and dropped anchor about 1½ miles from their opponents.  They were well aware of the invasion threat posed by the Armada and the Army of Flanders. The problem for them was that the strong defensive formation and formidable discipline of the Spanish fleet had made it impossible to get in amongst the enemy ships and do some real damage. Now that the Spanish were anchored, however, there was a new opportunity – fireships.

Sir William Winter, a sea captain of vast experience (he was about 63 years old) claimed that he came up with the idea of a fireship attack on 6th August and suggested it that evening to the English commander, Lord Admiral Howard.   It is possible that this is true, though the tactic was well known. It had featured in a book about tactics and weaponry called Inventions or Devices, published ten years earlier by the English polymath William Bourne, and Bourne probably got the idea from someone else (2). Even the Spanish were aware of the possibility of a fireship assault.

Fireships were seen as the best way of attacking a strong, anchored fleet. The aim of the tactic was to spread panic among the sailors of the target ships. They would be forced to cut their anchor cables as they tried to avoid being burned, throwing the fleet into confusion and making it far easier to attack with cannon.

Whoever came up with the notion, the plan was adopted by Howard’s council of war when it met in the early morning of Sunday 7th August.   An officer was sent to Dover for flammables, but it was soon realised that he could not get back before the next day. As time was of the essence, eight privately-owned English ships were pressed into service as fireships.   They were coated with pitch and tar, and filled with other fuel for the flames. Their guns were loaded, to make sure that they went off when the fire reached them, and each weapon contained two cannonballs, to maximise the impact of the attack.

At 11 or 12 pm (accounts vary), with the wind and tide in their favour, the fireships set off. They were manned by skeleton crews, who set the ships alight and then escaped in boats. Medina Sidonia had already anticipated the possibility of a fireship attack, and detailed a small ship to tow any such vessels out of harm’s way. However, when the eight blazing ships loomed out of the dark, he gave orders for the fleet to get under way.

No Spanish ships were hit by any of the fireships, and the Spanish did not leave the anchorage in panic.  Despite this, attack had a critical effect on the Armada. The fleet was temporarily dispersed, huge numbers of vital anchors and cables were lost (in an emergency such as this, it was quicker to cut cables rather than raise them), and the wind pushed many of the ships into the southern North Sea. In other words, the fleet was moving away from Calais and its chance of linking with the Army of Flanders.

With the Armada’s formation temporarily broken, the English were able to charge in among the Spanish ships. There was a pitched battle off the Flemish port of Gravelines the following day, just over ten miles NW of Calais. Rapid, close-range English fire caused heavy casualties and great damage.  Only one ship was sunk by direct fire, though the battering off Gravelines may have weakened some Spanish ships so much that they succumbed to storms on the way home (a disaster exacerbated by the lost anchors and cables).

The Armada resumed its formation after the battle, but the prevailing wind was still driving it further into the North Sea. The weather, and the pursuing English fleet, meant that there was no longer any realistic prospect of turning back and joining with Parma to invade England.  Effectively, the Armada campaign was over, and the fireship attack was the key to the English victory.

The Armada was a powerful, disciplined fleet full of experienced sailors and soldiers.   What was it about a mere eight burning ships that made them break formation? Even if each fireship had destroyed a target, the Spanish would have lost no more than eight vessels out of over 120.

The explanation is well known: Medina Sidonia thought that the fireships might be maquinas de minas, ‘explosion machines’. Floating bombs, in other words.

I want to explore this aspect of the story in a second blog, which will be published on 12th August. That will be the anniversary of the day on which the English fleet broke off its pursuit of the Spanish, and the Armada began its catastrophic homeward voyage round the coasts of Scotland and Ireland.

(1) The literature of the Armada is vast, but the account given here is based largely on Armada 1588-1988 (Penguin 1988), the catalogue of the 1988 National Maritime Museum exhibition, Colin Martin and Geoffrey Parker, The Spanish Armada, London (various editions 1988 on) and J K Laughton (ed), The Defeat of the Spanish Armada, Navy Records Society, London, 2 vols, London 1895 (reprinted Havant 1981). The latter is full of 16th-century documents, transcribed with modern spellings, and is a great introduction to the source material.

(2) William Bourne, Inuentions or Deuises. Very Necessary for all Generalles and Captaines, or Leaders of Men, as wel by Sea as by Land, London 1578; the manuscript can be viewed online thanks to the Schoenberg Centre for Electronic Text & Image, University of Pennsylvania (MS ljs345); the ‘8th Device’ is on pp 23r-24r:http://sceti.library.upenn.edu/sceti/ljs/PageLevel/index.cfm?option=view&ManID=ljs345

Ian Friel is a historian, researcher and author with over 40 years experience and an international reputation in the field of maritime history.